The Dirty River Band has been asked to play with Sentimental Gentleman tomorrow at The Dominion House (Basement Stage). Please come on out! Should be lots of fun! 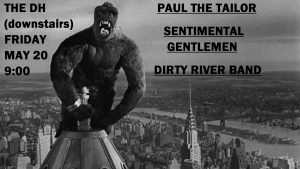 Due to unforeseen circumstances, Them County Bastardz will be unable to perform at tonight’s show but the good news is that Pulled From Panels has stepped up to perform instead. So tonight we will have The Dirty River Band with special guests EVL and Pulled From Panels. Hopefully some of you show up! 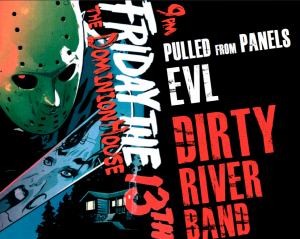 Hey everybody. We will be playing at The Dominion House in Windsor, ON on Friday, May 13th, 2016. We hope to see both of the people who actually read this webpage come out! 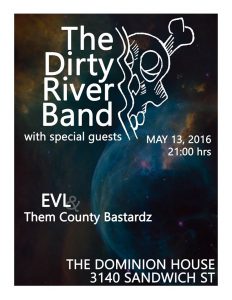 We are pleased to announce another show coming up. This one will be a Vaudeville theme complete with comedy and magic.

The Dirty River Band will be performing along with very special guests Dented Halos. The night will also feature comedy by the one and only Robert Kemeny and the awe inspiring talents of slight of hand specialist Jamie “Magic Man” Matchett.

Come out for this entertaining evening! 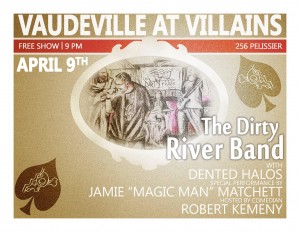 First things first, we want to say thank you to all the fine folks who have been so kind to invite us to share stages with them over the past couple of months, and to all the folks who have graciously accepted our invites to do the same, despite the fact that as a whole, we are very new to an incredibly talented pool of musicians in the Windsor and area scene.

Of course, we also want to thank the folks who have been so kind as to come up and tell us that you enjoyed our music.  Nothing makes us happier than to know we’ve entertained you.  These much deserved, if not under specified, thanks are being shorted so that I can use the space to tell you a story.

This past weekend for us as The Dirty River Band has been much anticipated.  Two nights back to back, lots of fun planned with some fantastic people, and honestly a pretty great opportunity for us on Friday night.  But the subject of this post is about the next evening.

Saturday we were invited to play a CD release show by our very good friends in Pulled From Panels (check them out, they are awesome!) out in Leamington at a place called Ray’s Ribhouse.

First of all, who’s complaining about a gig at a rib house?  The answer is nobody, and if you find someone who disproves that rule stop hanging out with them…

Ok, let’s get the least important factors out of the way:  The atmosphere is incredible, the staff are attentive and friendly, and the food is better than you can possibly imagine.  So much so that it is an insult that it is only being given a single sentence in this review.  However, there is something much more important about Ray’s Ribhouse.  Ray.

Just by walking in the door of this cozy establishment you get to know a little bit about Ray without ever laying eyes on the man.  The walls are covered with musical knick knacks and memorabilia.  Records and their jackets are stacked on and around everything, including the old piano and accordion sitting in the rear dining room.  Ray likes music.

Sit down in that dining room and you’ll be greeted by their menus.  When you see them, you’ll think, oh cute, did Ray have his kid draw up a menu cover? And then you’ll notice that every menu has a different, hand drawn menu cover.  And there are more kids drawings posted up behind the bar in between the music memorabilia.  Ray likes his community.

When we finally met Ray he was exuberant and happy and full of life.  You can feel the joy pouring off this man.  We finished our incredible meal as Ray and his staff, were clearing out the front room so the bands could start setting up for the show.

Them County Bastardz started off the show, (Also incredible, check them out with us May 13th at the DH! …shameless plug) and about halfway through their second song I noticed the HOUSE lights (These big round regular restaurant lights) started diming in time with the music.  That peeked my interest slightly more than a little.

When I pointed it out to Rob, he wondered if it was some sort of weird power drain.  But they were in time to the drums more than anything to do with what would draw power.  Do they even make a light dimmer that hooks into house lights and times to music?  I mean, it sounds possible, but how would you find one, and who the heck puts that kind of effort into a RESTAURANT that occasionally has live music?

A few minutes later as I was making my way around the crowd, I found the answer.  You got it.  Ray.

There he was at the back of the room.  Giant smile stretched across his face bopping up and down and manually operating the house light dimmer switch on the wall.  And he did it through the sets of ALL THREE BANDS, stopping only to get behind the bar to help his staff out.

Look, I’ve been around music and bars and people in general for a lot of years.  These kinds of folks don’t come around all that often.  Ray is all love.  He’s joy personified.  If you are a person who appreciates community, music, or life, you need to check this place, and this man, out.

People do a lot of talking about “Supporting your community,” here’s an opportunity to actually do that by supporting a guy who does, out of his own pure intent, support both his local, and musical community.  Drive out to Leamington and get a meal and maybe catch a show at Ray’s Ribhouse as soon as you can.  You won’t be disappointed. 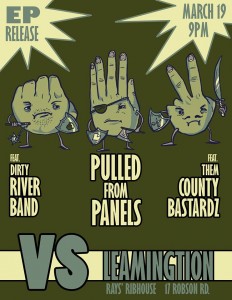 The Dirty River Band will be playing at The Dominion House (main foor stage) on March 18th. There will be no cover charge.

The Dirty River Band will be playing a show at The Dominion House (Downstairs Stage) in Windsor, ON on Saturday, March 12th. Hope to see you all in attendance! 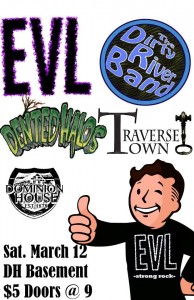 We will be playing at Villains Beastro in Windsor on January 29th with The Infidels and Pulled From Panels. Should be a kickass show. Please, everybody come out! 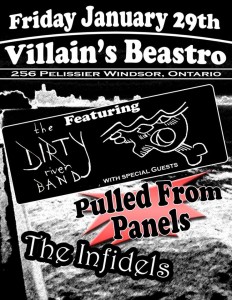 The Dirty River Band would like to thank Mike Beauchamp of Wolves From Dogs for coming out to jam with us this past Sunday. The jam was awesome and gave us lots of ideas for new material. Mike was also kind enough to take some photos of us.